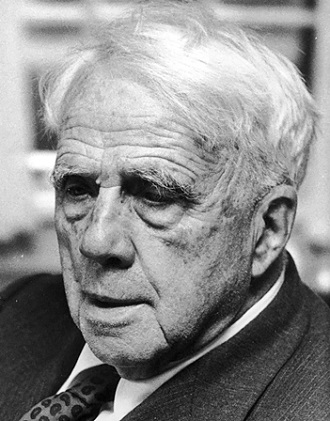 1. He was the first poet to address a US Presidential Inauguration

John F. Kennedy had a personal relationship with Robert Frost and the poet had helped create momentum to elect Kennedy during his campaign. Kennedy chose Frost to recite a poem at his inauguration and he intended on reading a new poem entitled "Dedication." In the end he could not read his poem due to snow, sun and faltering eyesight, and instead recited from memory The Gift Outright".

2. When his future wife first refused his marriage proposal he contemplated suicide.

Robert Frost attended high school with his future wife Elinor White. After selling his first poem Frost excitedly proposed marriage to Elinor who was studying in college at the time. Elinor was intent on finishing college first and refused, but would later accept his second proposal after she had graduated.

3. He was named after Confederate General Robert E. Lee.

Frost was born in San Francisco to William Prescott Frost, Jr. and Isabelle Moodie. Both of his parents were teachers, but after moving to San Francisco his father became a journalist. The Frost parents decided to honor the Confederate General Robert E. Lee by naming their son Robert Lee Frost.

4. He received four Pulitzers for his poetry and a US Congressional Gold medal.

John F. Kennedy awarded Frost the US Congressional Gold medal in 1960 for his contribution to the culture of the United States. He is one of only four individuals to have also won four Pulitzer prizes for his poetry collections in 1924,1931,1937, and 1943.

While writing his poetry Frost worked as a farmer, and then as an English teacher in America to support himself. Finding only limited success and resistance from publishers Frost moved to England believing British publishers would be more receptive to his work. It was a gamble that paid off when his first book of poetry was published in England in 1913.

6. The poet's life was marred by a series of tragedies.

There was no limit to the grief Frost endured in his lifetime. He lost his father to tuberculosis when he was 11, and his mother to cancer when she was just 26. His younger sister died in a mental hospital, and his wife Elinor suffered from cancer then died due to heart failure. He outlived four of the six children he fathered with Elinor.

7. The epitaph on his gravestone is taken from his poem "The Lesson for Today"

It is unclear if Frost intended "The Lesson for Today" to be used as the epitaph on his gravestone. It was presented to the public on June 20, 1941 and included in the collection A Witness Tree in 1942. The last two lines of the poem read:

I would have written of me on my stone:
I had a lover's quarrel with the world.

8. He was a valedictorian of his high school class.

Despite the tragic loss of his father Robert Frost was an excellent student. He went to high school in Lawrence, Massachusetts. Both he and his future wife Elinor White were co-valedictorians in the 1892 graduating class.

9. He died from complications with surgery.

Robert Frost was diagnosed with prostate cancer in 1962. In the same year he went through an extensive surgery. He died due to complications from that surgery in 1963.

10. He is regarded as one of the most popular 20th century poets.

Robert Frost's poetry earned him immense recognition and appreciation from readers worldwide. He lived his life as a champion of naturalism and the arts. His poetry is accessible for all ages, yet contains a deeper layer that questions mortality and the human condition.